Things to see and do

There is something for everyone, East Lothian has a wealth of things to see & do and here we aim to introduce some of these activities to help you plan and enjoy your stay on our golden coast. It may feel like a million miles away from the city but its only minutes from Edinburgh by car train or bus!

East Lothian is one of Scotland's best kept secrets

Our self catering holiday properties are located along the East Coast from Aberlady to Dunbar The sunshine coast, With miles of magnificent coastline, golden beaches, rolling countryside, spectacular cliffs, award winning tourist attractions and the world's finest selection of golf courses, Our holiday properties are located along this magnificent coastline. With a unique microclimate that offers more sunshine than most other locations in Scotland, it is rolling farmland, cliff top walks, beaches, golf courses, rambling, cycle routes, historic houses and castles, charming villages and seaside towns - in fact everything you might want for a relaxing holiday or a short break in the country. East Lothian's coast to the east of Edinburgh attracts many visitors each year for several different reasons.... .Family trips to the beach to paddle in the sea, build sandcastles and eat soggy sandwiches!

Fun for all the kids (however old they are!)

A privately run park which includes a selection of animals including Lamas , Highland cattle and deer as well as lots of activities to keep children of all ages entertained including the play barn and the cycle kart track, not to be missed.

For enthusiasts of our transport heritage there is the Museum of Flight at East Fortune which includes the famous Concorde among it's exhibits. Then there is the Myreton Motor Museum near Aberlady which has a fine collection of cars and motorbikes dating back to 1899.

For golfers, the East Lothian coast is home to some of Scotlands finest golf courses including the world famous Muirfield. The range of water sports, windsurfing, surfing, wake boarding, first in Scotland, diving, sailing as well as kayaking and kite surfing.

Choose from locations such as Edinburgh, Aberlady, Gullane, Dirleton, Whitekirk, North Berwick or Dunbar , all great places to spend a day, a week or indeed longer if time allows! From the excitement of Musselburgh Racecourse to the awesome sight of Concorde in all her glory, the award winning Scottish Sea Bird Centre to the impressive cliff top fortress of Tantallon Castle you will be spoilt for choice.

Charming towns and villages of North Berwick, Gullane, Dunbar, Aberlady and East Linton invite you to browse in art galleries, museums and gift shops. The famous Brunton Theatre attracts some of the best theatre, dance and entertainment around and not to be forgotten, The Fringe by the Sea, gains new performances each year, and of course the golf East Lothian is the ancient home of golf. You will find some of the great links and parkland courses of the world here, including the famous Muirfield Links. 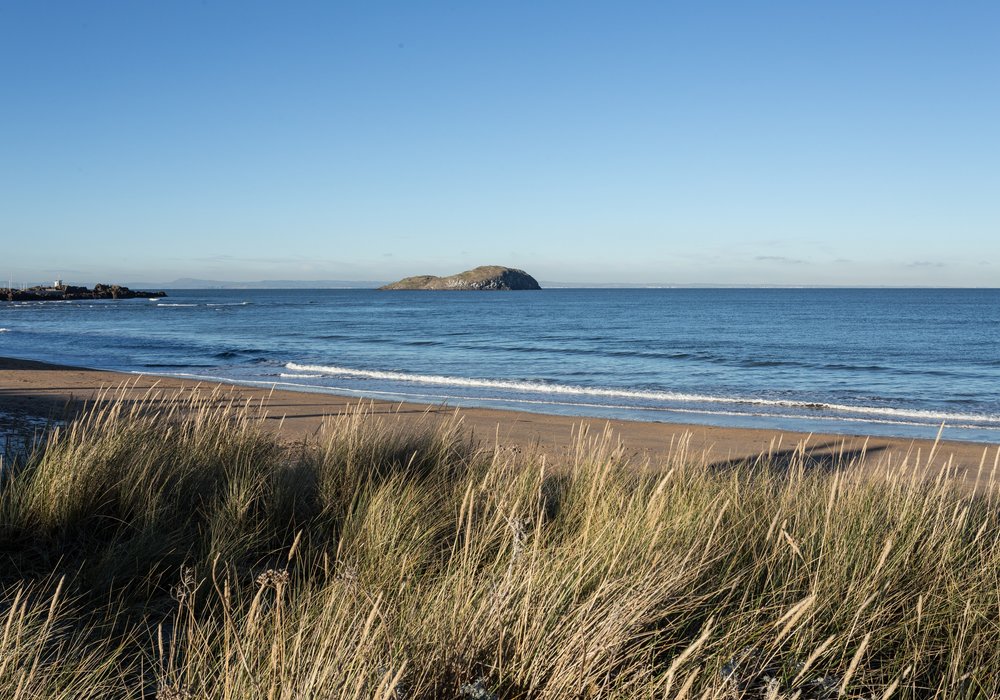 This beautiful coastline is home to a rich variety of wildlife and thousands of seabirds arriving each year to nest on its islands . Charming towns and villages invite you to browse in art galleries, museums and gift shops. East Lothian . known as the garden of Scotland, you can savour delicious fresh local produce, as well as seafood specialities in East Lothian’s delicatessens, restaurants and cafes. Look out for the farmers’ market in Haddington and the quarterly Slow Food Festival at North Berwick, where you can try some of the best food and drink to be found in East Lothian. And don’t forget to sample Scotland’s national drink at the five star Glenkinchie Distillery. Officially the sunniest and driest area in Scotland, with more hours of sunshine than anywhere else in the country, you’ll have all the time you need to make the most of a visit to Scotland’s sunshine coast. Scottish Natural Heritage have also produced a leaflet highlighting places to Explore for a day in East Lothian.

With more first class courses along this short stretch of course than you can shake a stick at. Top of the list must be Muirfield itself, home to the open championship. Play the Links courses at Luffness, Dirleton , Gullane, Archerfield, North Berwick and Dunbar. The range of courses that stretch all along the coast offer a testing challenge to players of all skill levels.

Trains and buses run regularly from Dunbar and North Berwick, making a visit to Scotland's beautiful capital city a very relaxing and entirely enjoyable experience, without any of the hassle of city driving and expensive parking, and finally, you are so close to Edinburgh and with such excellent transport links.

On board the custom-built, 55 seat catamaran, passengers can enjoy a 45-minute crossing between North Berwick, East Lothian and Anstruther, Fife.

There are two boat trips available from North Berwick harbour to Fidra - Treasure Island and to the Bass Rock. The Bass Rock is paradise for ornithologists who will see gannet, guillemot, razorbill, puffin and kittiwake. The Scottish Seabird Centre, a great place to spend a day, with lots of interactive attractions for the kids, and where you can watch live footage of the birds on the nearby Bass Rock.

Many locations to choose from

Such as Edinburgh, Aberlady, Gullane, Dirleton, Whitekirk, North Berwick or Dunbar , all great places to spend a day, a week or indeed longer if time allows!North Berwick is a pretty little town in the shadow of the volcanic plug, Berwick Law, and is a mecca for sailors. It is also home to the Scottish Seabird Centre, a great place to spend a day, with lots of interactive attractions for the kids, and where you can watch live footage of the birds on the nearby Bass Rock. The Bass Rock is one of the foremost nesting sites in Scotland for seabirds, and there are regular boat trips from Berwick to see them first hand and at close quarters. With a population of more than 90,000 East Lothian is one of the most picturesque areas of Scotland. The County stretches from the eastern edge of Edinburgh to the waters of the North Sea. Rich in history, the past is kept alive with rugged castles, historic market towns and the remains of ancient settlements. The quality of the urban and rural environment is one of East Lothian's greatest assets with the most beautiful coastline and some of the finest farmland in Scotland. It is bounded on the south by the Lammermuir Hills and stretches eastwards to the boundary with Scottish Borders at Cockburnspath. There are many places in which to base your stay in East Lothian from the coastal towns of North Berwick and Dunbar to the inland historic county town of Haddington. All with good access to Edinburgh, Edinburgh airport and the South. Throughout the summer months East Lothian hosts many festivals including Fringe by the Sea, North Berwick, North Berwick Highland Show, Air Show at the Museum of Flight and the 3 Harbours Arts Festival in Prestonpans. Places of interest to visit, include the Museum of Flight at East Fortune, Glenkinchie, Scotland's most southerly distillery; the Bass Rock, a sanctuary for birds and the 3rd largest gannetry in the world, the Seabird Centre, North Berwick and the John Muir Birthplace in Dunbar, which details the life and achievements of the conservationist and founder of America's National Parks. Historic castles include Dirleton, Tantallon and Hailes, which are all maintained by Historic Scotland.